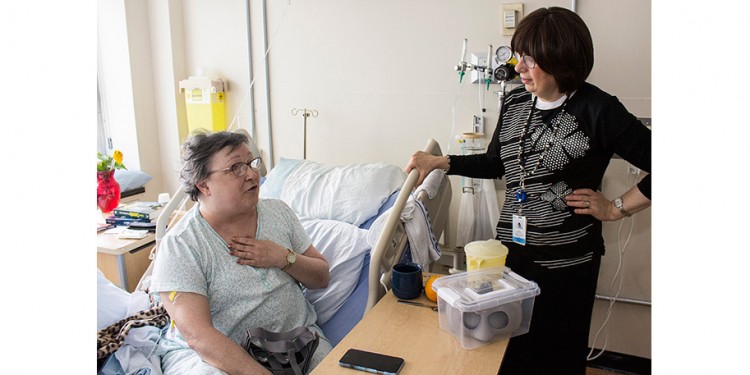 Lucie Lacroix cradles a set of virtual reality goggles in her lap, while telling Rifka Hanfling about the uplifting emotional experience of taking virtual trips to foreign locales.

Year after year, Lucie Lacroix kept hoping she might one day accompany her husband on a trip to Cinque Terre, a breathtaking region of seaside cliffs in northwestern Italy. Sadly, that trip was not meant to be.

However, with the aid of the virtual reality goggles that she has used in the JGH Department of Palliative Care, Ms. Lacroix has finally had a chance to immerse herself in the splendours of Cinque Terre, while sensing the soul of her late husband by her side.

In doing so, she has joined a growing number of JGH patients who have taken advantage of the technology in Palliative Care to boost their spirits, while lessening anxiety, fear and depression—the only such patients in a Quebec hospital to use virtual reality videos in this way.

For the moment, two sets of goggles are available, thanks to support from Hope & Cope. However, that number could increase if, as anticipated, the results of an upcoming study yield evidence to support the apparently beneficial effects of excursions via virtual reality.

For Ms. Lacroix, there’s no doubt about the feelings of contentment and pleasure that the videos generate. “It’s as if someone has placed me on a cushion of well-being,” she says, describing her emotions not only while watching the travelogues, but in the hours afterward.

“The moment I begin a film, I feel like I’m back on that cushion,” she continues. “And it doesn’t end when the film is over, because my mind is still swirling with such beautiful images. I find that they’ve given me the will to continue.”

By early August, Ms. Lacroix had revitalized her feelings of happiness by getting up close to a herd of African elephants, examining life in a seemingly arid desert, and soaring above one of the world’s highest waterfalls—experiences she remembers as “extraordinary, really amazing!”

That’s precisely the reaction Rifka Hanfling was hoping to evoke when she first brought the goggles to Palliative Care in fall 2018. Earlier that year, Ms. Hanfling, Hope & Cope’s Coordinator in Palliative Care, had been looking for new types of complementary therapy to introduce in the department, when the subject of virtual reality was raised by Sophie Guérin, a volunteer who is also a medical student.

Working together, they found that the technology had been tried in London (England) and Toronto to reduce fear and anxiety not just for patients in Palliative Care, but in burn units and among children who were apprehensive about the treatment they were about to undergo.

With the support of Hope & Cope, and with approval from Dr. Bernard Lapointe, Chief of Palliative Care at the JGH, Ms. Hanfling contacted a friend who owned the equipment and was willing to let patients use it.

“As soon as they start using the goggles, they perk up and say, ‘Oh, I know this place!’ It arouses good feelings that they want to share with members of their family.”

“We noticed that many of our patients were immigrants who said, ‘I wish I could go back to my home country one more time,’” she recalls. “When we heard that, I knew there was something we could do.”

That “something” was to download virtual-reality travelogues of places around the world that held emotional significance for the patients. Currently, the library includes about two dozen videos—each about five minutes long—that explore locales such as Paris, Jerusalem, Manhattan, Mecca, Scotland, Chile, the desert in Dubai and Mount Elbrus in Russia.

By January of this year, Ms. Hanfling had bought two sets of goggles, which are now enjoyed by patients several times a week. The technology, which is cleaned after each use to prevent the spread of infection, is available to those who are relatively well and are not experiencing dizziness, dementia or similar conditions. Patients must also be able to sit up in bed and turn their head relatively easily to fully appreciate the 360-degree panorama.

One might wonder whether scenes of the “old country” could depress someone who knows that he or she can never return there. However, says Ms. Hanfling, the exact opposite is what actually happens: Those vistas revive memories of happy times that patients are eager to talk about.

“As soon as they start using the goggles, they perk up and say, ‘Oh, I know this place!’, and then also they start reminiscing about other places. It arouses good feelings, and they want to share that legacy with members of their family.”

Ms. Hanfling has noticed that the positive sensations can last up to two hours, but she is determined to do more than just record her own observations. That’s why she and Ms. Guérin are planning a formal research study, with the guidance of Dr. Carmen Loiselle, Hope & Cope’s Scientific Director, and Research Manager Jacqueline Vachon. Dr. Lapointe will serve as Principal Investigator.

Although research in other institutions has already documented the benefits of virtual reality, Ms. Hanfling says the JGH study is expected to build on the previous findings. She also hopes a paper on the subject can be published and presented next year at a conference on palliative care.

Over the long term, and with Hope & Cope’s support, Ms. Hanfling would like to acquire additional goggles, upgrade the equipment, and arrange for a professional company to perform the downloads and store the videos by using cloud technology.

“Whenever I walk into a patient’s room with the goggles,” Ms. Hanfling says, “I immediately get a big smile and a question: ‘Where am I going today?’ Virtual reality makes them feel more like the person they actually are than the patient we see here.”

From the archives: Demonstration of an electronic stethoscope