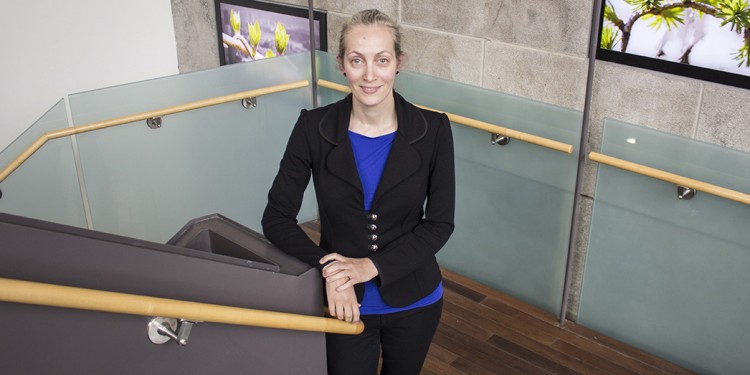 Studies have shown that, in general, roughly 87 per cent of dissatisfied healthcare users do not complain about the quality of the service that they receive—a situation that Maude Laliberté is intent on changing.

As the recently appointed Commissioner of Complaints and Quality of Service (Ombudsman) for CIUSSS West-Central Montreal, Ms. Laliberté is determined to have more patients, clients and residents come forward to tell her how care can be improved in facilities across the healthcare network.

Ms. Laliberté acknowledges that it’s sometimes disheartening to hear of incidents where care is not up to the CIUSSS’s standards. Nevertheless, she says, if users want better service, it’s crucial for them to come forward and make their feelings known.

“A complaint isn’t necessarily something negative, since it shines a light on an area that needs to be upgraded,” she explains. “Health care and social services are part of a complex human system, so it’s not unusual for there to be situations that are less than optimal. A complaint is the public’s way of pointing to the problem and making us aware of it.”

Listen to a podcast with Maude Laliberté

Often, Ms. Laliberté says, users are reluctant to complain because they doubt that doing so will yield positive results. Some also fear they will place themselves or a vulnerable loved one in an uncomfortable position by lodging a complaint that may upset a member of staff. Others are simply unaware that the ombudsman’s office exists at all.

In response, Ms. Laliberté is trying to make more healthcare users aware of how much can be achieved through the complaints process, as well as reassuring them that voicing their dissatisfaction is nothing to be afraid of. “We’re not here to assign blame, but to look for solutions and improve the system,” she says.

At the JGH and in other healthcare facilities of CIUSSS West-Central Montreal, a complaint can be registered and assistance can be requested from the Commissioner of Complaints and Quality of Service (Ombudsman) online, by email, or by phoning 514-340-8222, extension 24222.

When users do complain, they most often register their dissatisfaction in one of three areas:

Ms. Laliberté notes that her office does more than deal with complaints: To a large extent, she and her staff also help users navigate what can sometimes be a dismayingly complicated healthcare system. Users often need advice on what steps to follow and which CIUSSS facility is best suited to offer a particular service.

Providing this kind of support is not what Ms. Laliberté initially saw herself doing when she received her degree in physiotherapy from the University of Montreal in 2002. However, after several years of experience in physiotherapy and research, she developed a strong interest in bioethics.

“I began to wonder about the numerous factors that influence how care is provided,” she says. “After all, the human side of care—establishing a relationship between a caregiver and a user—is essential to what we do.”

This eventually led her to join the Ombudsman’s team in mid-2016. Though based at the JGH, Ms. Laliberté and her colleagues regularly visit facilities throughout the CIUSSS to provide advice and support, in addition to discussing users’ concerns.

One might think that listening to a steady stream of complaints on a regular basis is bound to take an emotional toll, but Ms. Laliberté says this is not the case. “I don’t hear people complaining; I hear them telling me stories,” she explains.

“I put myself in solution mode and I try to understand how I can help or guide them. Obviously, some users can be highly assertive or even difficult, but those are the exceptions. If you look closely at a complaint, it turns out to be a special kind of question. When I hear it, I want to go looking for answers.”

From the archives: The beat goes on in Obstetrics

Future of care envisioned as a balance between technology and emotion