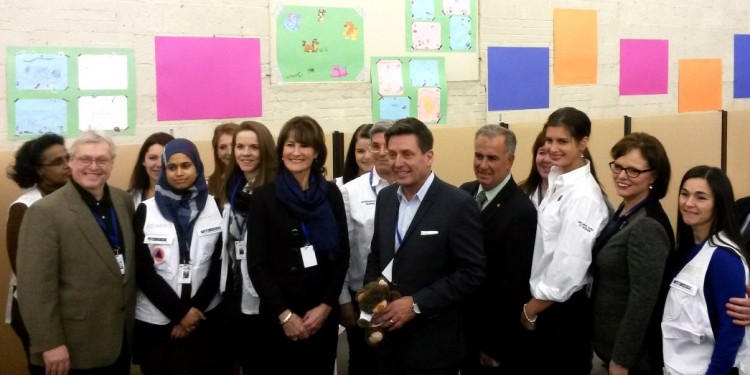 Healthcare professionals from facilities in West-Central Montreal Health—including the Jewish General Hospital—played key roles over the winter in conducting health and psychosocial assessments of the many refugees who arrived in Montreal from Syria.

After the first flight arrived on December 12, assessments began in a temporary clinic that was set up at the former Royal Victoria Hospital to handle the high volume of refugees. Additional care and medical services were later provided in a dozen permanent refugee clinics across Québec.

Montrealers also demonstrated their generosity by making substantial donations of winter clothing for the Syrians, which was collected at drop-off centres at the Côte-des-Neiges CLSC and the JGH.

Within the 72 hours of their arrival, the refugees underwent assessments of their physical and psychological health, and were redirected, as needed, to receive follow-up treatments or medication. Since vaccination of all refugees is also a top public-health priority, basic immunization was performed.

In a February message to staff, Dr. Lawrence Rosenberg, President and CEO of West-Central Montreal Health, said that it was to the credit of the network’s employees “that they were the first to be called upon by the government to provide these essential services to the newcomers.”

On a related note, he also acknowledged the “excellent work” of West-Central Montreal Health in the Regional Program to Welcome and Integrate Asylum Seekers. Initiated by the former CSSS de la Montagne, this program provides social services and other crucial types of support to refugees and asylum seekers.

In addition, at the Parc Extension CSLC, immigrant women who are pregnant for the first time can benefit from the LOV (Lait, Oeufs, Vitamines – Milk, Eggs, Vitamins) program, which offers valuable advice on topics ranging from nutrition to breastfeeding to bolstering self-esteem.

“The goal of these programs and services—and of our healthcare network in general—is to do more than just dispense facts,” Dr. Rosenberg said. “Our objective is to create an atmosphere of warmth, community and empowerment—something we must all strive to achieve whenever anyone turns to us in what may be their gravest and most desperate moments.”