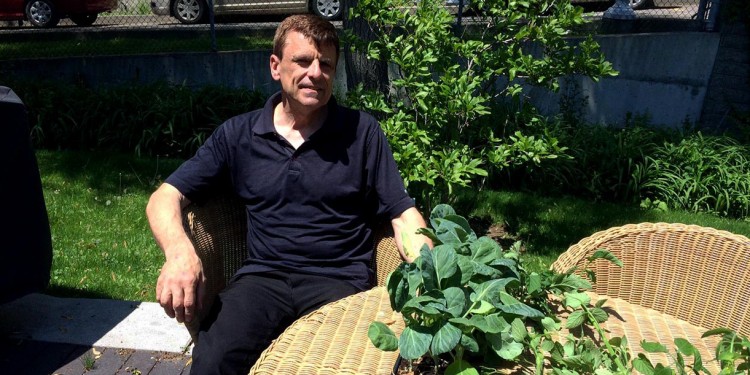 Christopher Wrobel relaxes in the green environment that he loves.

If there seems to be some unusually eye-popping appeal to this spring’s display of flowers and greenery in the garden of the JGH Hope & Cope Wellness Centre, you can chalk it up to Christopher Wrobel’s appendicitis.

So impressed was Mr. Wrobel with how effectively his illness was treated in the JGH Emergency Department several years ago that he came away determined to do something special to show his appreciation by helping other patients.

As an agronomist with a keen interest in sustainable and self-sufficient ecosystems, Mr. Wrobel couldn’t help but notice that the hospital grounds needed more greenery and plants. Given the healing power of nature, the notion of creating a sustainable garden with therapeutic value convinced Mr. Wrobel he was heading in the right direction. But what should the next step be?

For advice, he turned to an acquaintance, Dr. John Hoffer, a researcher in the Lady Davis Institute at the JGH, who suggested that the Wellness Centre (Lou’s House) would be ideal for the project that he had in mind. Its Christine and Herschel Victor Garden is used regularly during the warmer months by clients of the Centre, which is managed by Hope & Cope to provide support to cancer survivors across Montreal, regardless of their hospital affiliation. The Centre offers a wide variety of mind-body programs, classes, workshops and activities to help people live well with—and beyond—cancer.

In spring 2016, volunteers planted new flowers and greenery in the garden of the JGH Hope & Cope Wellness Centre.

In spring 2016, Mr. Wrobel presented Hope & Cope with a detailed, illustrated plan for the garden. Then he spent several weeks analyzing the composition of the soil and the presence of sunlight and shade at various times of day.

Also uppermost in his mind were some key features of a sustainable garden, including the use of fragrant, colourful flowers and native plant species that are well adapted to the soil, organizing the area so that objects such as statues and benches are clearly defined.

“The idea is to create an ecosystem that will attract beneficial insects that pollinate the flowers, and birds such as hummingbirds and blue jays,” Mr. Wrobel explains.

These factors guided his choice of plants and flowers—a small apple tree, black-eyed Susans, echinacea (in purple, red and pink), New York and New England asters, and more—as well as their location in the garden.

In June, Mr. Wrobel dug, weeded and added topsoil and compost, assisted by several volunteers, including his close friend, Susan Smith, who is Director of the Career and Planning Service at McGill University’s Macdonald Campus; her daughter, Shannon; and Peter Asselin, a Côte-des-Neiges resident and volunteer at the Multicaf Community Cafeteria.

In addition, Mr. Wrobel generously donated plants and materials to the Wellness Centre’s garden. “After a long Montreal winter, we relish the opportunity to enjoy warmth, sunshine and fresh air in beautiful surroundings,” says Suzanne O’Brien, Executive Director of Hope & Cope. “This garden will be a tremendous morale booster for cancer survivors.”