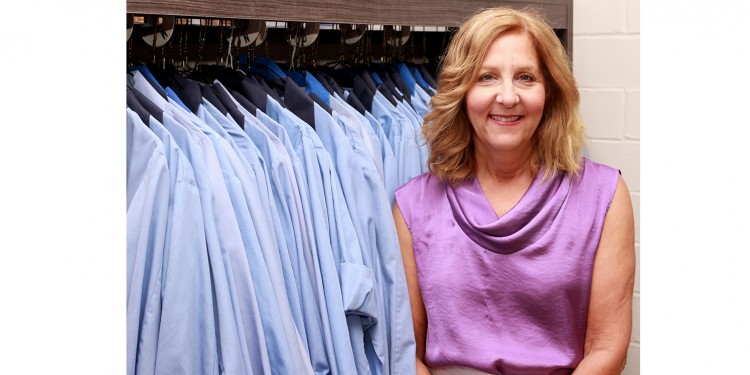 Joanne Laing with the distinctive blue jackets worn by volunteers at the Jewish General Hospital.

Sometimes the job that brings out the best in you is the one that you never imagined you’d have. That’s how I feel today as Director of Volunteer and Pastoral Services, a position where, every day, I’m privileged to see people giving freely and generously of themselves to bring hope and comfort to patients and other healthcare users. What brought me to this point was a bit of luck, some happy coincidences and a life-long determination to make our community stronger.

I grew up in the vibrant 1960s, when our dinner table was a forum to discuss the news of the day. As well, I was introduced to the art of debate, the importance of community and the need to give back. I also learned by example from my parents, who volunteered for many organizations, and from my grandfather, Jack Bogante, the founding President of the Jewish Hospital of Hope, who instilled in me the joy of community and giving. So naturally, after participating in the debate team at the Davis Y from the age of 12 to 14,  I volunteered to run the program.

After high school, I attended Vanier College and then Concordia, with a major in political science, while volunteering at Federation CJA. Then came a major change: After graduating, in order to satisfy my passion for Israel, I moved there from 1982 to 1986. I lived for three years in Kibbutz Degania Bet, where I met people from many countries who had come to Israel to volunteer. I then moved to Tel Aviv to work in the tourism industry, where my colleagues—some of whom I tutored English—embraced me with kindness. Often, they invited me to their homes, where I experienced real Israeli living and felt I was truly part of the community.

On my return to Montreal, I worked for the Canadian Jewish Congress, where I held various lay positions, usually involving connections between Israel and Montreal. A few years later, I began an entirely new chapter in my life as the single mother of a 10- and 5‑year-old. In need of permanent employment, I eventually received a job offer that brought me to the Jewish General Hospital in 2001.

“I feel privileged to work with our volunteers, because they’re among the most precious resources in our CIUSSS.”

My initial exposure to the JGH was as an employee in the Technical Services Department, where I had a wonderful opportunity to take a fresh look at community involvement, this time from a health care perspective. What also impressed me was the incredible “army” of volunteers, whose dedication and motivation influenced me on a daily basis. From time to time, I even dropped into their office to chat.

With these volunteers as my inspiration, I accepted an invitation to chair the JGH’s Centraide campaign in 2003 and continued to do so until 2010. In this capacity, I spoke about Centraide throughout the hospital to the full range of personnel, including doctors, nurses, orderlies, housekeeping staff, technicians and allied health professionals. The more I met with them, the more interested I became in our institution and the vital role it has played for decades, and continues to play today.

One of the most enriching aspects of the JGH is the ability that it provides to upgrade one’s education. And so, in 2008, at the age of 50, I embarked on a Master’s degree in organizational management in health care at the University of Laval. This was, without a doubt, an amazing experience in every way—a chance to learn from and engage with other healthcare professionals and managers, while enabling me to discover talents I hadn’t known I possessed.

Through a fortunate coincidence, I graduated in March 2015, just as the JGH’s long-time Director of Volunteer Services was preparing to retire. After first serving in that position on an interim basis, I was permanently appointed in May 2016 to my current post within the Division of Quality in CIUSSS West-Central Montreal.

I feel privileged to work with our volunteers, because they’re among the most precious resources in our CIUSSS. What resonates most strongly with me is their determination to make a difference in the lives of patients, residents, clients and staff. In fact, it’s the same passion that I witnessed many years earlier, when I first started working here—for instance, the smile of a young volunteer who has just spent an hour just talking with a patient. It warms my heart to realize how this experience has touched both of them.

Today I instinctively feel that I’m exactly where I’m meant to be, because my work gives me an opportunity, each and every day, to help someone in need. What a rewarding feeling it is to meet individuals from around the world, who come to our hospital with the sole purpose of helping others. It doesn’t get much better than this!