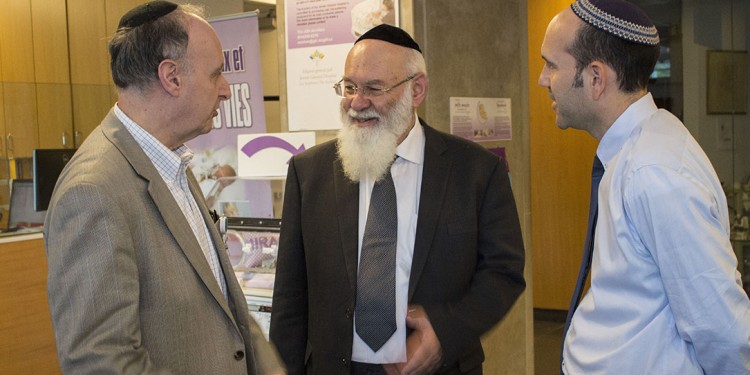 Even though Jewish tradition considers life to be sacred, extraordinary measures do not always need to be taken to prolong the life of a dying person, a leading international expert on Jewish medical ethics explained in a public lecture at the JGH.

However, Rabbi Dr. Avraham Steinberg, a pre-eminent authority on the Jewish approach to end-of-life care, cautioned the audience in the Block Amphitheatre to view his remarks only as a broad overview of the subject.

“These are just general rules,” Prof. Steinberg noted during his lecture on July 18. “Each case needs to be discussed on its own merits. This is not carte blanche to say, ‘The patient is dying, so let’s take away all treatment and let him die.’ That, from a Jewish point of view, is unacceptable.”

Prof. Steinberg initially came to Montreal as a featured speaker at the 9th International Conference on Jewish Medical Ethics, which was held the previous weekend. On an invitation from Dr. Michael Bouhadana, a staff physician and palliative care consultant in the Goldman Herzl Family Practice Centre at the JGH, he agreed to visit the hospital to address staff and the public.

Prof. Steinberg, a pediatric neurologist, is Director of the Medical Ethics Unit at Shaare Zedek Medical Center in Jerusalem; former Director of the Center for Medical Ethics at Hebrew University-Hadassah Medical School in Jerusalem; a member of the Counseling Committee on Organ Transplantation at the Israeli Ministry of Health; author of the Encyclopedia of Jewish Medical Ethics; former head of a commission in Israel to develop what became known as “the dying patient law”; and a member of the Vatican’s Pontifical Academy for Life.

According to most Jewish experts, he said, the rule of thumb is that medical treatment can be withheld from a dying patient who is suffering and is expected to die within a certain period of time, and also if continuing treatment will be of no help or will only briefly prolong life.

Prof. Steinberg elaborated on each element of this principle:

“It is our duty in the last weeks or months of life to do what we can to let the patient die as peacefully as possible.”

Some rabbinical authorities have had misgivings about palliative care, Prof. Steinberg said. However, an overwhelming majority agree that, if properly administered, palliative care “is not only allowed, but is actually mandatory.

“It is our duty in the last weeks or months of life to do what we can to let the patient die as peacefully as possible, without hastening death and without intending to kill, but simply intending to alleviate pain.”

The full lecture can be viewed on a YouTube video.